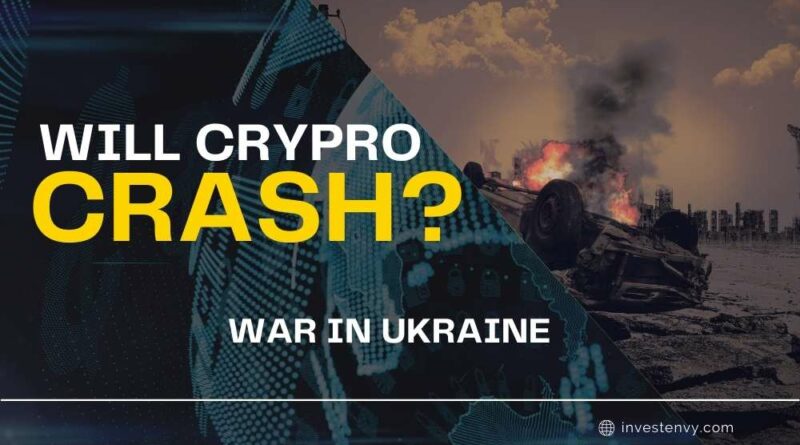 There Many are wondering if there will be a crypto crash in 2022 following the Russia-Ukraine crisis.

Here’s a quick recap: In response to President Vladimir Putin’s demand that the Ukrainian army lay down its arms, Russia has begun a full-scale military invasion of the country. The United States, the European Union, and other Western allies have stepped up sanctions against Russia.

These devastating sanctions have targeted banks, oil refineries, and military exports. Ukraine’s President, Volodymyr Zelenskyy, has sworn that his country would not surrender and that it will continue to fight to defend itself.

How will this affect the cryptocurrency market and why is crypto crashing?

Top Cryptocurrencies React to the War

Other well-known cryptocurrencies, including Ethereum, bitcoin, BNB, Solana, and Cardano, have all seen their prices fall in the recent 24 hours, with the exception of bitcoin.

With today’s crypto price collapse, the total crypto market has lost an incredible $500 billion in less than a week, bringing it down to levels not seen since last summer, according to CoinMarketCap data.

Bitcoin’s reputation as “digital gold” and a safe haven for investors in times of crisis has been broken, as has its potential to attract new investors.

Following the Russian invasion of Ukraine, according to an email from the Bitfinex trading team, bitcoin is following the lead of other so-called ‘risk assets’ in a downward spiral as global financial markets reel under the strain. Global geopolitical shifts and stock market movements are intricately intertwined.

Brent crude futures, the international benchmark for crude oil, just reached $100 per barrel for the first time in over seven years, coinciding with the collapse of bitcoin and other cryptocurrencies.

Brent crude futures are the international benchmark for crude oil. Recent weeks have seen a rise in the price of gold, which has historically functioned as a safe haven for investors during periods of increased risk exposure.

In reaction to Russian President Vladimir Putin’s “special military operation” in Ukraine’s eastern Donbas region, the United States, the United Kingdom, and several of their allies have placed a series of economic penalties on the country, with more to come. Experts have debated if these penalties would lead to a crypto crash.

Will the Markets Recover from a Crypto Crash?

As a result of Federal Reserve purchases to compensate for the economic damage caused by the Covid-19 epidemic and subsequent lockdowns, Bitcoin’s price has surged by more than 300 percent in the last two years.

Because of the Federal Reserve’s preparations to raise interest rates for the first time in its history and wind down its massive stimulus program, bitcoin has lost more than half of its value since reaching a top of about $70,000 in November.

During the last two years, smaller cryptocurrencies such as Ethereum, BNB, Solana, Cardano, and XRP have outperformed bitcoin in terms of value growth.

“It appears to me that the bleeding will continue, but that we are nearing the end of the road. According to my calculations, bitcoin is a better deal at $38,000 than it is at $69,000. Alex Lores, head of blockchain market research at Quantum Economics, stated in an email that despite the price of bitcoin has fallen below $34,000 in recent weeks, he continues to be “bullish on bitcoin and decentralized digital assets in the long term.”

Because I overestimated the severity of the Russia/Ukraine conflict, selling pressure on global markets and the S&P 500, which has lost more than 10% from its all-time closing high, has occurred, with the index entering correction territory.

The Right Way to Invest in Cryptocurrency

Many investors are weary of making mistakes when picking investments. Investing in cryptocurrency is a risky and even more speculative investment in today’s crypto market crash. Cryptocurrency is a digital currency that uses cryptography for security. It is decentralized. This means it is not subject to a central authority or regulating body.

A cryptocurrency can be created from scratch, or it can be obtained from mining. Mining involves solving complex math problems to validate transactions and create new blocks of the blockchain.

The miner who solves the problem has their computer’s work on the next block verified by other miners on the network, receiving newly minted crypto coins as a reward for their effort.

Blockchain is a digital ledger in which transactions are recorded chronologically and publicly across many different computers around the world; it serves as a public record of all transactions that take place on its network.

Investing in cryptocurrency has been a risky proposition for many. Cryptocurrency is a decentralized digital money unregulated by any central bank or government. It can be used to make anonymous and secure purchases without the involvement of a middleman.

The risks of investing in cryptocurrency include:

How to Avoid Losses in a Crypto Crash

There are many ways things can go wrong in crypto investing. Here are some of the most common pitfalls that people fall into:

1) Many first-time crypto investors don’t perform adequate research. This is dangerous since the market is so volatile and rife with hype. If you don’t do your research, you could end up losing all your money.

2) Another mistake is failing to diversify your portfolio. Never invest all of your money in a single coin. If it falls, everything will fall with it. Diversifying your portfolio ensures that you have more chances of making money and less risk of losing everything.

3) Another common mistake is failing to use a crypto wallet. A crypto wallet is a software program or physical device that stores private and public keys. It enables you to send, receive, and store digital currency, such as Bitcoin.

Investing in cryptocurrency can sometimes be a rollercoaster experience. But if you perform your due diligence, and follow the right steps, you can come out ahead.