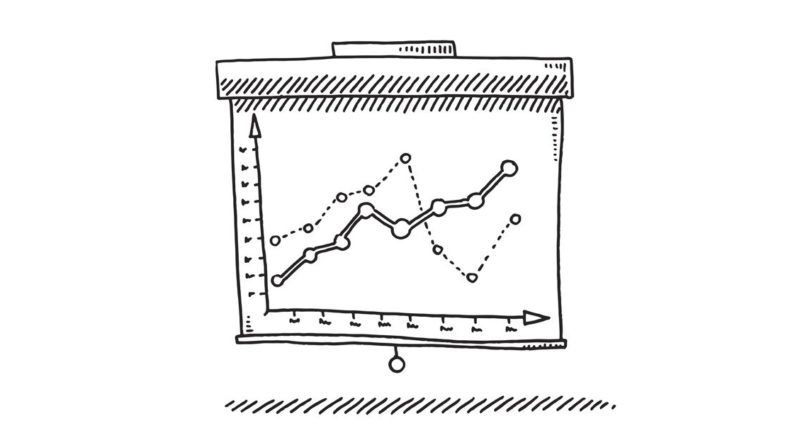 
Celebrating Easter and April Fool’s Day both on the same day feels appropriate in 2018.

Interest rates have risen again, and plenty of traders are waiting for the punchline.

My task this weekend starts with assuring you it’s all for real. If the world feels a little crazy, it’s because you are paying attention. But stick around. We’ll try to turn it into fun.

I found a lot of charts that I want to talk about, so let’s jump in with one that gives me very mixed feelings.

You have to wonder: Why all the silence?

It shouldn’t be that hard to come up with material to tweet about. Maybe he’s just being polite to his colleagues in the eurozone, who are contending with a sudden and surprising reversal in their macroeconomic fortunes.

The difference between the European and U.S. Economic Surprise Indexes is now the highest since 2012. (The euro index has been cratering). pic.twitter.com/xQWyZ5aCho

Importantly, the US economy isn’t just looking good by comparison. The United States is large and diverse, but growth has been a reliably urban phenomenon since the Great Recession.

Bullish on the heartland: “In 2017, rural areas outperformed their share of the economy with respect to job growth. We see a continued rise in outer exurban areas…at growth levels not registered since 2008.” https://t.co/jG0Ygy6vlw pic.twitter.com/cw3PfXzCmT

The gap between upbeat headline economic statistics and dire lived experiences is not new to the United States. It’s been a reliable feature of post-Great Recession life. And you would expect the mood as it reverses to be buoyant.

So what’s killing the vibe?

The unfortunate side effect of growing faster than our trading partners is that it directs their money and attention here.

Today has been the best day for the Dollar ($DXY) since Oct 26 – second best since the bear trend started at beginning of 2017: pic.twitter.com/g31qZl2wFG

The dollar has caught a bid, and that’s just the beginning. I talked about the bond market’s “dangerous curves” last month. Perhaps I should have written about dangerous lines instead.

It feels ever more as though we can forget January’s market melt-up. The Treasury yield curves (2s-10s) is now as flat as it has been since the first week of the year: pic.twitter.com/KSN3M67gM4

The standard fear when this condition presents comes straight out of economics textbooks, where flattening yield curves are typically described as harbingers of a recession.

Of course, that’s not automatic.

@johnauthers Yield curve claim of Atteberry is at best questionable: circled are instances of US yield curve being as flat as today: pic.twitter.com/DppQA72ASt

One might see the above chart, count the red circles, and conclude that in four out of seven cases a flattening curve is a sign that the party will continue for several more years. But of course, be careful. Anything is possible.

It does feel a bit weird, though, to hear the last few months’ trading described as a “bear market in bonds.” Thirty-year Treasuries have spent most of the month rallying and were trading at 3.01% at the close of business this Thursday. That’s 12 basis points lower than they were at the end of February.

I don’t mean to minimize forward-looking concerns, like the increasing amount of the US federal budget going towards debt service payments.

It’s hard not to feel that the market is evolving some very particular tastes regarding leverage.

Look in particular at how many “investment grade” bonds, in fact, receive the lowest grade: BBB.

Triple-B issuers – which are loading up on debt – make up nearly half the investment grade bond market https://t.co/YpFObBazk0 pic.twitter.com/l8HKsZQJNL

Could this perhaps have something to do with the lack of “high-yield” bonds?

Not sure exactly what to make of the high yield market… when the incremental supply of an asset dries up, it’s usually a good time to buy due to supply / demand dynamics, but very unusual for notional high yield AUM to be flat in a non-recessionary environment. pic.twitter.com/n2PVNLktLd

And the experience of more seasoned offerings has shown that a company’s multiple can expand significantly as a reward for simply staying in place.

$STC earnings trend has been flat to negative over past 10 years however,valuation is at all time high. The #MSCI & #FTSE index inclusion trade has forced many people into speculative behavior that will result in future disappointing returns. #ValueInvesting #TASI pic.twitter.com/pXXYIAimw8

Of course, that’s only true for individual equities.

Some active managers have been experiencing the opposite, turning in significant outperformance only to be greeted by a chorus of redemptions.

Unreal: the Fidelity Contrafund has doubled SPX returns and crushed its peers yet sees nothing but outflows w/ -$15b out in last 12 mos, h/t @JSeyff pic.twitter.com/jp46UdDJyP

So I’d forgive you for wanting to go corporate. The market verdict seems to be that consistently manufacturing alpha isn’t worth quite as much as an ability to say “We’re Number 1” frequently and with tremendous conviction.

I hope you found this useful. I have more links you might want to peruse over the course of the weekend.

Sloane Ortel publishes The Sloane Zone, an email newsletter that comes when you least expect it and makes more sense than it should. She joined CFA Institute’s staff as a sophomore at Fordham University, and was instrumental to the global growth of Enterprising Investor as a collaborator, curator, and commentator over the subsequent eight years.