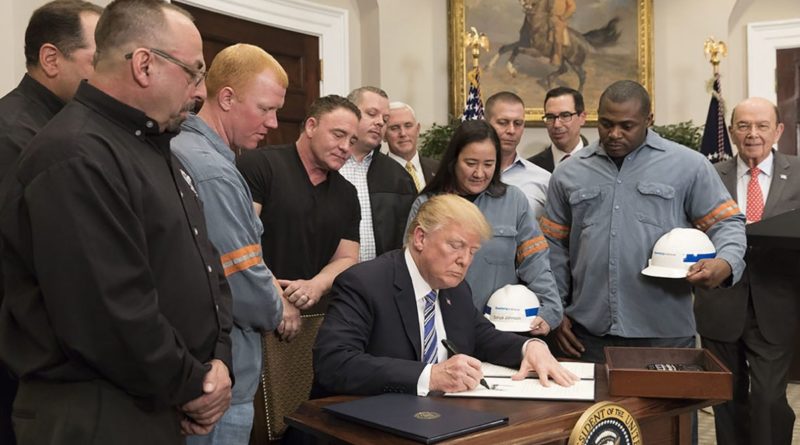 President Donald Trump has long talked a tough game on trade. Before his election as president of the United States, during a June 2016 campaign stop at the Alumisource recycling facility in Pennsylvania, he said:

“Today we import nearly $800 billion more in goods than we export. We can’t continue to do that. This is not some natural disaster, it’s a political and politician-made disaster. Very simple. And it can be corrected and we can correct it fast when we have people with the right thinking.”

During the run-up to the election, Trump routinely made similar comments about the US balance of trade, clearly spelling out a very protectionist, US-centric agenda.

During his first year in office, however, he seemed to walk back his hawkish campaign trail comments. After calling the North American Free Trade Agreement (NAFTA) the “worst trade deal” ever signed by the United States in March 2017, Trump appeared to soften his position. Rather than threaten to pull out of NAFTA altogether, he suggested he would renegotiate portions of the agreement.

Then on 8 March 2018, President Trump hardened his stance once more, announcing new tariffs on imported steel and aluminum. Effective 23 March, the tariffs impose a levy of 25% on steel and 10% on aluminum coming into the United States. For the moment, both Canada and Mexico are exempt from the new tariffs, presumably so the three countries can renegotiate NAFTA. Nevertheless, Trump’s tough talk on trade now appears to be manifesting itself as tough policy.

So, what does this mean for global trade and financial markets?

The current consensus among economists is that protectionist trade policies backfire. This is not a new opinion. For example, prior to the passage of the Smoot–Hawley Tariff Act of 1930, more than 1,000 economists signed an open letter to President Herbert Hoover spelling out the case against protectionism. (Who knew there were so many economists back then?)

The central points of the letter were as follows:

The economists were roundly ignored and Smoot–Hawley became law in June 1930. And, as predicted, each of the key risks highlighted in the letter was subsequently realized. Many now believe that the Smoot–Hawley tariffs launched a global trade war that accelerated the Great Depression.

Over the years, the subject of tariffs, trade balances, and protectionism have been revisited many times. In 1964, Milton Friedman argued in “Using the Free Market to Resolve the Balance of Payments Problem” that a system of free-floating exchange rates, which commenced in 1971, when President Richard Nixon suspended the gold standard for the US dollar, would resolve balance-of-payment pressures via the free market.

As it happens, Austin Barker, CFA, wrote “The US Balance of Payments — Problems and Remedies” in 1965. He identified burgeoning deficits as one of the nation’s most critical economic problems, citing the $2.8 billion deficit in 1964, which was equivalent to 0.41% of 1964 GDP. Given today’s persistently large US deficits of 3% to 6% of GDP, Barker’s concerns seem almost quaint.

In 1982, Victor A. Canto, Arthur B. Laffer, and James C. Turney plainly declared that protectionist policies do not work in “Trade Policy and the US Economy.” In 1999, CFA Digest summarized a presentation by then–US Treasury secretary Larry Summers, “Reflections on Managing Global Integration,” in which he says that globalization should continue to reduce regulatory differences among markets, although countries should maintain their national sovereignty.

In response to Trump’s jawboning trade policy in recent weeks, 45 US-based trade groups representing some of the largest firms in the nation encouraged President Trump to avoid imposing tariffs on China.

Is the Trump administration rejecting the prevailing wisdom about trade and going it alone? Maybe.

Martin Feldstein has other ideas, however. In “The Real Reason for Trump’s Steel and Aluminum Tariffs,” he says that the tariffs are meant not so much to persuade China to stop dumping its excess steel into US markets but rather to abandon the idea of “voluntary” technology transfers from US companies exporting to China.

Feldstein also thinks that the United States can avoid a broader international trade war in the process.

Time will tell which path the United States chooses, but the points laid out by Feldstein bear close watching to see where the world may be headed.

Image courtesy of the White House

Ron Rimkus, CFA, was Director of Economics & Alternative Assets at CFA Institute, where he wrote about economics, monetary policy, currencies, global macro, behavioral finance, fixed income and alternative investments, such as gold and bitcoin (among other things). Previously, he served as SVP and Director of Large-cap Equity Products for BB&T Asset Management, where he led a team of research analysts, 300 regional portfolio managers, client service specialists, and marketing staff. He also served as a Senior Vice President and Lead Portfolio Manager of large-cap equity products at Mesirow Financial. Rimkus earned a BA degree in economics from Brown University and his MBA from the Anderson School of Management at UCLA. Topical Expertise: Alternative Investments · Economics