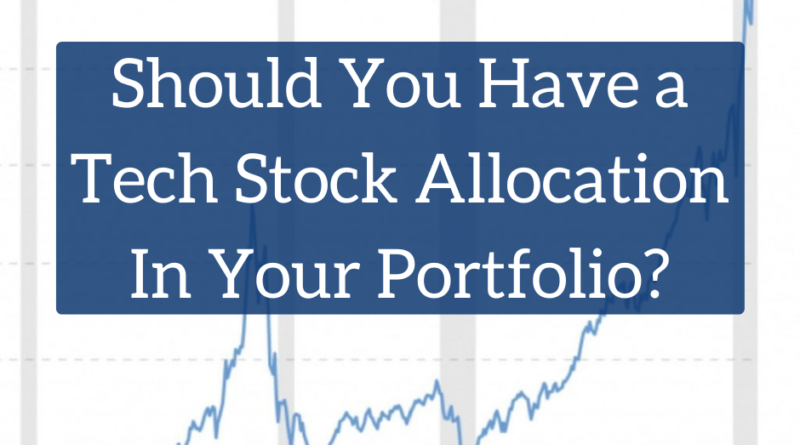 
You may be wondering what the best tech companies to invest in are and maybe even if you should have a part of your portfolio allocated specifically to tech stocks. As an index fund investor, you likely already own the best tech stocks, so before you double down on them, here’s what you’ll want to know.

Lately, I have been starting to see something that I haven’t seen in over 20 years: people with a part of their asset allocation dedicated to tech stocks. Let me give you an example:

Some time in the mid to late 2000s, I read a ten-year-old book. The book was well-written and mostly very reasonable in its recommendations. And then I came to a point in the book where it gave a recommended asset allocation. The allocation included a 5% allocation to tech stocks and a 5% allocation to telecom stocks. I thought, “Hmmmm…..that’s funny. Nobody recommends those sorts of tilts anymore. I wonder why?” Well, it doesn’t take a genius to figure it out. The most common tech ETF back then was QQQ, which basically tracked the tech-heavy NASDAQ index. Let’s take a look at it. 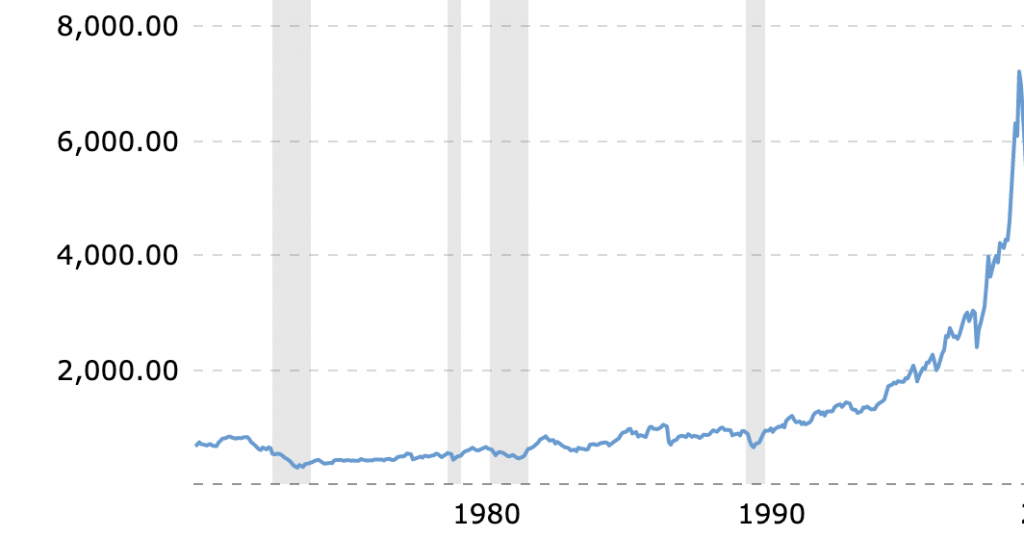 Very different picture, right? No one in their right mind would add a dedicated tech slice to their portfolio after seeing this. But now people are talking about it again. Why would that be? It couldn’t just be performance chasing, could it? 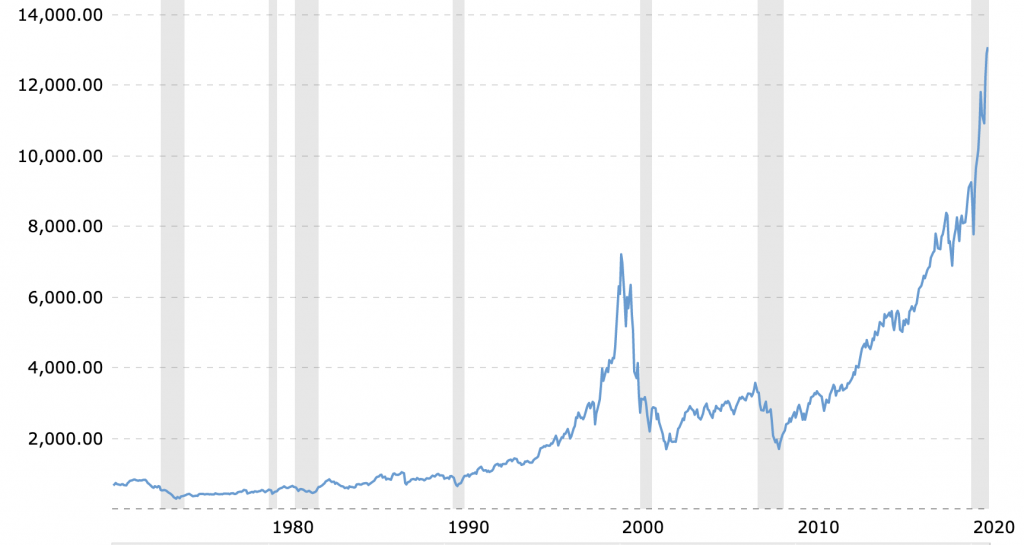 I think it probably is. Obviously, it’s tough to say something is a bubble until after the bubble bursts, but doubling down on something with recent strong past performance is generally a recipe for disaster. As Harry Truman said,

“There is nothing new in the world except the history you do not know.”

It’s performance chasing at its finest. Just because you wish you had put all your money into tech stocks 5 years ago doesn’t mean you should do so today.

Adding a Tech Stock Allocation to Your Investment Portfolio

So what does it do to your portfolio to add a tech allocation to it? Let’s say you’ve got a portfolio that is currently 30% Total Stock Market and you’re thinking about adding a 5% tech stock allocation to it. That 5% has to come from somewhere, so we’ll assume you take it out of the Total Stock Market Fund and put it into the Tech Fund, let’s use QQQ just for convenience, but you could easily substitute VGT or FNCMX for it. Let’s look at the top holdings in the two funds by percentage: 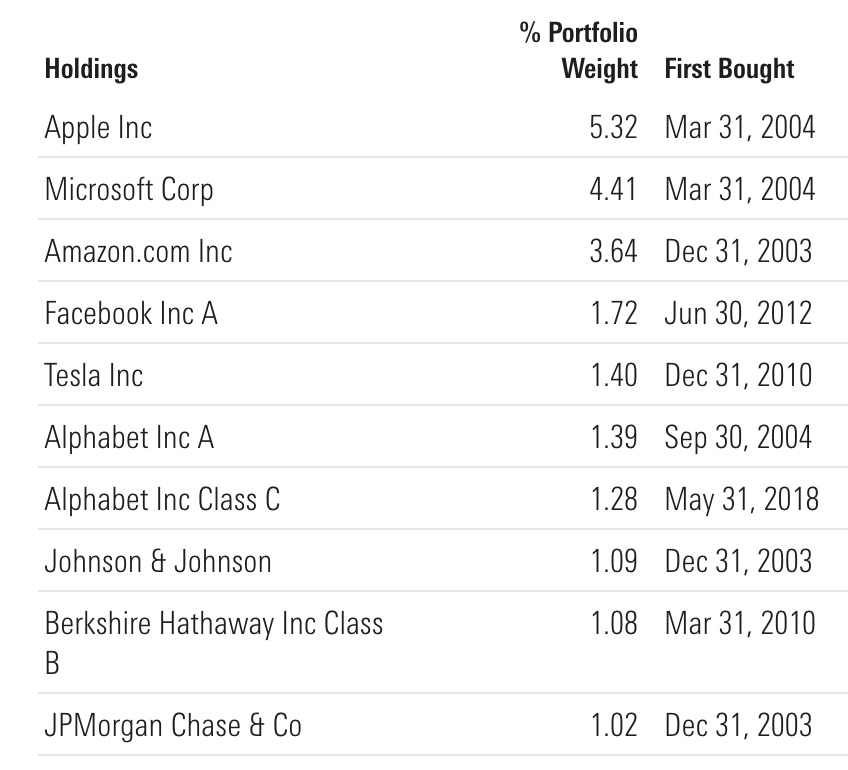 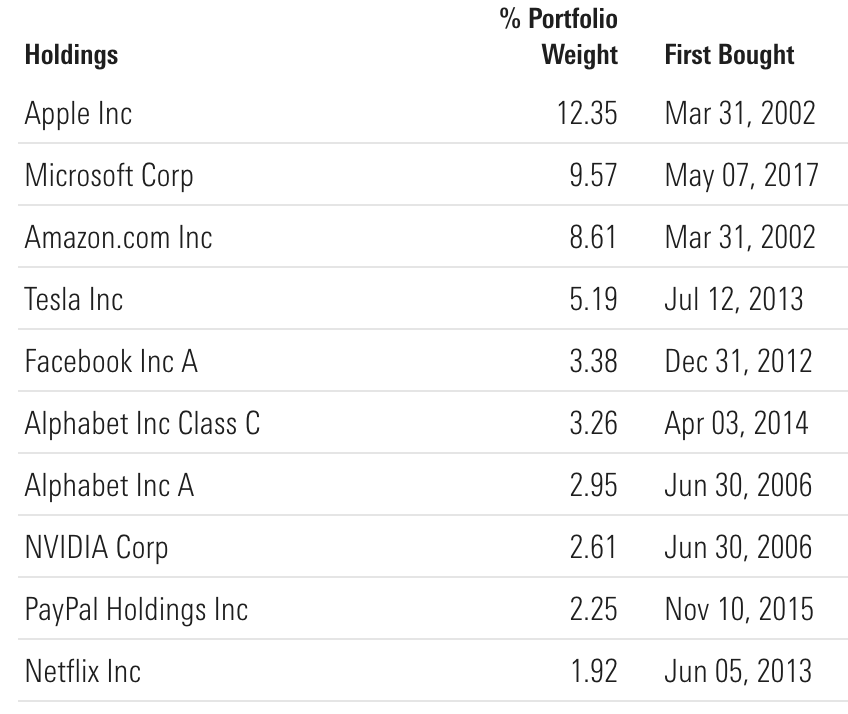 Well, that’s weird. They look almost the same, don’t they?

The first seven holdings above are exactly the same. The only difference is that they make up 19% of the Total Stock Market but 44% of QQQ. You already owned all of these top tech stocks. Now you just own more tech stocks. And you are buying them AFTER their excellent performance and AFTER they become super popular. Does that seem like a good idea to you?

So if you go from a portfolio that is 30% TSM to 25% TSM + 5% QQQ, what has really changed? You have essentially gone from the left to the right. 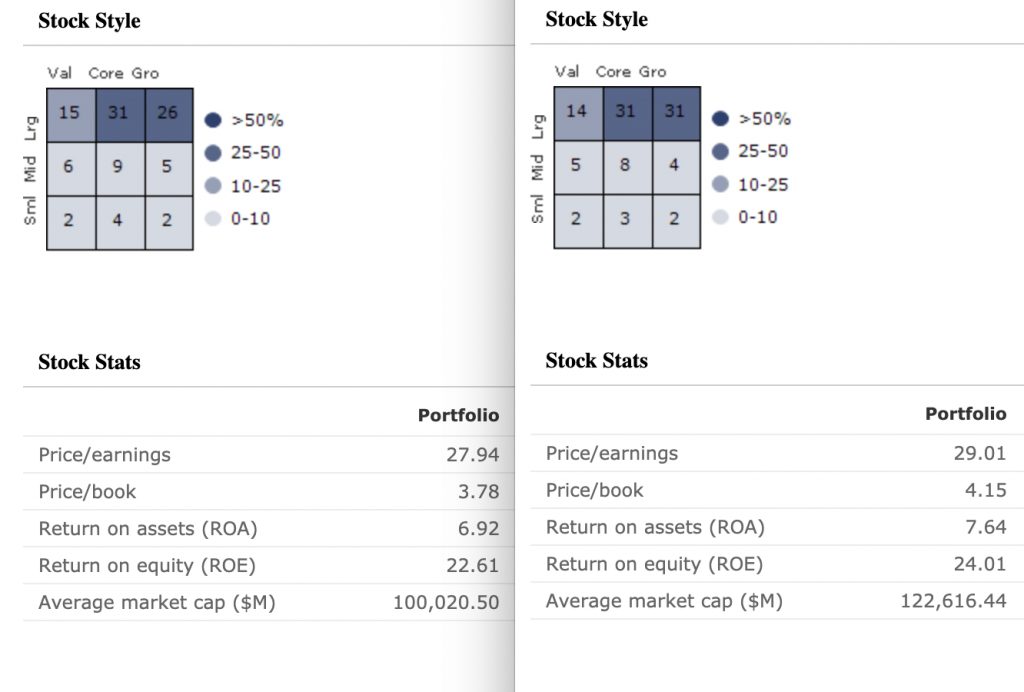 You now have a portfolio that is a little larger and a little growthier. That’s it. You’ve basically doubled down on some large growth stocks comprised of tech companies that you already owned a whole bunch of. Take a look: 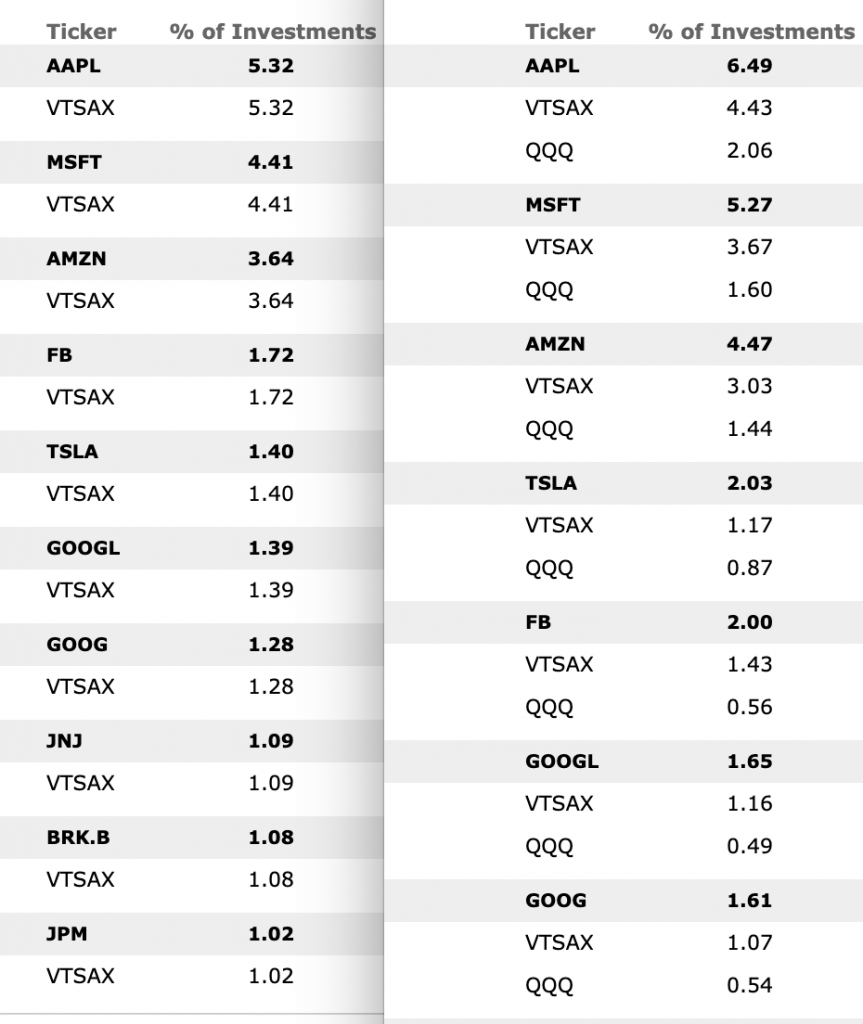 You now have 6.5% Apple stock instead of 5.3% Apple and 2% Facebook stock instead of 1.7% Facebook and 2% Tesla stock instead of 1.4% Tesla. Is that really what you were going for? Are you now more diversified or less diversified? In essence, all you’re doing is betting that recent past performance is going to be indicative of future performance. That’s such a bad idea that mutual funds are required by law to tell you it is a bad idea. Want a really sobering thought? Take a look at this list of the top holdings of the Total Stock Market from the end of June 2018, less than 3 years ago: 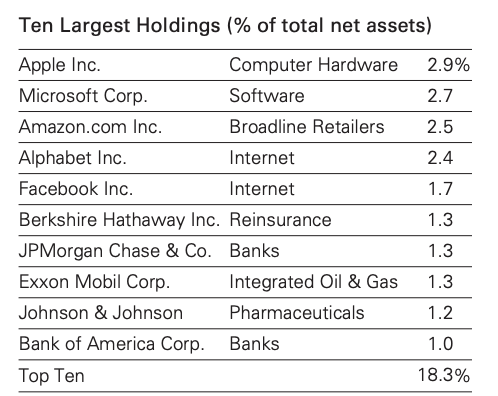 As you can see, you already own 50-100% more Apple, Microsoft, Amazon, and Google stock than you did 3 years ago. And now you want more? If you really want to add a QQQ tilt to your portfolio, the time to do so is NOT after a massive run-up. Anytime between 2003 and 2013 would have been fine though. 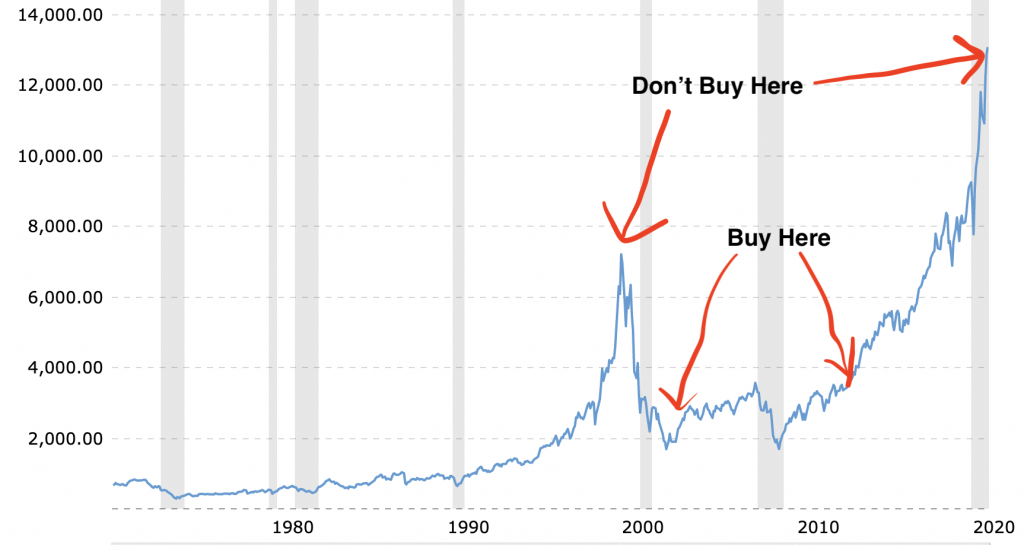 You should probably ask yourself why you weren’t interested in buying it then. Once you understand why, it will likely fix your desire to buy it now. You see, we as investors are hard-wired to chase performance. It is simply the way our brains work. You must do all you can to resist it. I have found that a written investing plan with a requirement to wait three months before making any asset allocation changes has done the trick for me. After three months have passed, I’ve usually forgotten about my crazy idea. And if not, then I go ahead and make the asset allocation change.

What do you think? Do you have a tech stock allocation? Would you add one now? Comment below!