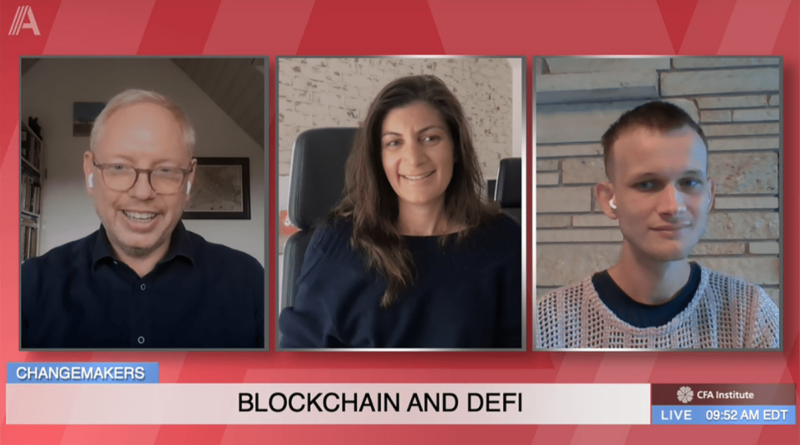 “The future of assets is tokenized.”

That’s what Mona El Isa, the founder and CEO of Avantgarde Finance, told the audience at the Alpha Summit by CFA Institute last month.

El Isa and another blockchain pioneer, Ethereum founder and chief scientist Vitalik Buterin, discussed the evolution of blockchain technology and the future of decentralized finance (DeFi) that is driving change in asset management with moderator Eelco Fiole, CFA, founder and managing partner of Alpha Governance Partners.

The Vast Potential of Blockchain and DeFi

El Isa and Buterin both started their blockchain journeys with bitcoin, then quickly realized that the potential applications for the blockchain went far beyond currencies.

“Bitcoin blockchain does one thing and one thing well,” Buterin said. “It maintains bitcoin the currency.” He saw the need for a broader core blockchain technology and in 2013 started working on Ethereum, a general purpose blockchain that supports a programming language. “For whatever agreements, contracts or any application you want to build, you write the business logic or code, publish it, it’s running, and you can interact with it,” he said.

El Isa spent nearly 15 years in traditional finance, as one of the youngest market makers and prop traders for Goldman Sachs. She later ran a long-short equity portfolio for a large European hedge fund. But it was when she started her own hedge fund that she encountered asset management’s high barriers to entry.

“I was shocked by the inefficiencies in the industry,” El Isa said. She’d never dealt with the costly administrative and operational burdens of a start-up hedge fund.

“We had floors of operational people at the big institutions where I worked previously, but I never actually knew what they did,” she said. “As a small- to medium-sized entity with less than $200 million under management, you’re set up to fail.” After a year of swimming against the tide, trying her utmost to succeed, she realized it was not going to work and liquidated her hedge fund.

Then while determining her next move from a beach in Brazil, she began reading about bitcoin and became hooked on Ethereum. “I was so excited by everything I was reading: I couldn’t bear the idea of not fully immersing myself in it,” El Isa said.

In late 2015, she moved to “Crypto Valley” in Switzerland where she joined a very techy bitcoin scene. “I was the only woman and only non-developer at the bitcoin meet ups,” she said. At the very first meeting, someone asked her if she was there by mistake. “No,” she told him. “This is exactly where I’d planned to be.”

In 2016, she co-founded Melon, now rebranded to the Enzyme protocol, within Avantgarde Finance, as a way to break down the barriers to entry in asset management. “Melon was the second or third player in DeFi, before the DeFi term was even a thing,” El Isa said. “We set off to build the first ‘on-chain asset management infrastructure’ on Ethereum.” Her firm weathered the crypto bear markets of 2018 and 2019 and the pandemic and is still going strong. Since launching Version 2 in January 2021, Enzyme has acquired $40 million in assets under management (AUM), a 700% jump.

“DeFi has huge promise for greater efficiency, accessibility, and transparency that will result in new ways of working and reaching more people than traditional finance.” — Eelco Fiole, CFA

Buterin defined a “smart contract” as a computer program run on a blockchain that controls digital assets. DeFi is a category or application that seeks to replicate financial services and different types of financial contracts — whether you’re holding or trading assets or creating contracts between assets.

“We’ve come really far in DeFi in the last three years,” Buterin said. “Up until recently there were barely any interesting applications.”

“We’ve had real traction for the first time ever,” El Isa added. “In the last bull market, we had crazy valuations and DeFi applications that hadn’t ever delivered. It’s more exciting this time around. We have technology that works and we’re growing fast in terms of user adoption.”

“In order for DeFi to really scale,” she went on, “we need to focus our efforts now on security and insurance. With DeFi, you are the responsible person: There’s no one to look after you if things go wrong.”

El Isa hopes insurance applications like Nexus Mutual that provide safety and security for users will scale and succeed and pave the way for mass DeFi adoption.

In addition, well-known trade-offs among accessibility, usability, and scalability are on the decline. For Ethereum, Buterin expects the severity of such trade-offs to continue to decrease as scalability technology improves. “Currently the capacity of Ethereum blockchain is fairly limited and transaction fees are fairly high,” he said. His researchers are working to scale the Ethereum blockchain itself in layer 2.0. Other near-term improvements in usability and lower technology costs will help make it more acceptable to people who’ve never participated in blockchain before.

Fiole mentioned, as of today ETH has a market cap of $400 billion and Ethereum as a core technology has some of the greatest development activity and the most available applications.

Fiole extolled the blockchain as a groundbreaking technology, singling out its “trustless” quality — that is, the trust is built-in through code. By comparison, traditional asset management is highly regulated, with even more regulations on the horizon, around climate-change, for example.

“In DeFi, you have to assure both integrity of the protocol and investor protection,” Fiole said. For example, protocols use “administrator keys” to manage risks, make upgrades, and even enforce emergency shut downs. Users have to have trust in the ecosystem and are dependent on the administrators.

As a case in point, El Isa said that Enzyme is one of the more complex protocols. “We upgrade in a decentralized way,” she said. Users have to opt-in to upgrades. In keeping with decentralized values, they are not forced to upgrade.

Enzyme has three types of stakeholders: Tokenholders, Developers (vault or investment managers), and Users (investors in the vault) — each with their own set of incentives related to governance of the protocol. Tokenholders are rewarded with higher token value if the protocol is used. Developers receive (MLN) tokens if they do good work.

El Isa and her team recognized early that users, on the other hand, did not have good representation, even though they trusted the system the most. “So we established a governance council consisting of both technical experts, including auditors for smart contracts, and users,” she explained.

El Isa noted the appeal of yield-bearing strategies, given the shortage of digital dollars. “You can find very attractive lending rates on digital dollars,” she said. “And any positive yield looks attractive, especially if you’re in countries like Switzerland where you have to pay to keep your money in a bank account.”

These yield strategies also hold up well in different market environments or during periods of high volatility.

Recently yield farming has become popular where rewards in the native tokens are received over and above normal yield for providing liquidity to the protocol and thereby offering a kicker in the rate of return. Though, as always, investors need to pay attention to potential risks.

In yield farming, yields are variable and the highest yields often come from the riskier protocols. “You need to look at the quality of the code base and risk profile of the codes,” El Isa said. “If you’re a lender in DeFi and the protocol gets compromised or exploited, you could have a total loss of funds in a worst-case scenario.”

Buterin believes the yield farming opportunities will decline as protocols scale. He also emphasized the technical risk. Every smart contract has some chance of breaking. “We don’t know exactly what that chance is,” he said. “But investors need to understand this risk.”

Fiole noted that today DeFi has $76 billion in total locked-in value and over 7,000 coins and counting listed on exchanges. He asked, “How many tokens are we going to see?”

El Isa doesn’t believe there should be a limit on the number of tokens. “Just when it becomes overwhelming, this is where asset management helps to filter,” she said. She sees a parallel in the evolution of asset management in traditional financial markets — investors first focused on passive token strategies and now there’s a real shift to active management to create alpha.

The Future Outlook of Blockchain and DeFI

Over the next few years, Buterin expects the technical challenges of blockchain technology — such as the breaking of cryptography by super computers — to be solved one by one: Scalability and security will be improved through Ethereum 2.0, leading to more applications. Ethereum researchers are also working on an exciting “proof of stake” algorithm to reduce Ethereum’s energy consumption by a factor of more than 1,000 (99.9%).

“We’re still in the very early days of DeFi,” El Isa said. “But this time is much more exciting. We’re seeing real usage and traction. This time around it’s more oriented around features and usability. It’s no longer just about the token price.”

Julia Hammond, CFA, is a director in the Educational Events and Programs group at CFA Institute, where she leads the planning for a number of annual and specialty conferences, including the Fixed-Income Management Conference, the Equity Research and Valuation Conference, the Latin America Investment Conference, the Alpha and Gender Diversity Conference, and the Seminar for Global Investors, formerly known as the Financial Analysts Seminar. Previously, she developed strategies for pension, endowment, and foundation fund clients at Equitable Capital Management (now AllianceBernstein), and she has also worked as an auditor for Coopers & Lybrand (now PricewaterhouseCoopers). Hammond served for a number of years as chair of the investment committee for the Rockbridge Regional Library Foundation. She holds a BS in accounting from the McIntire School of Commerce and an MBA from the Darden School at the University of Virginia.